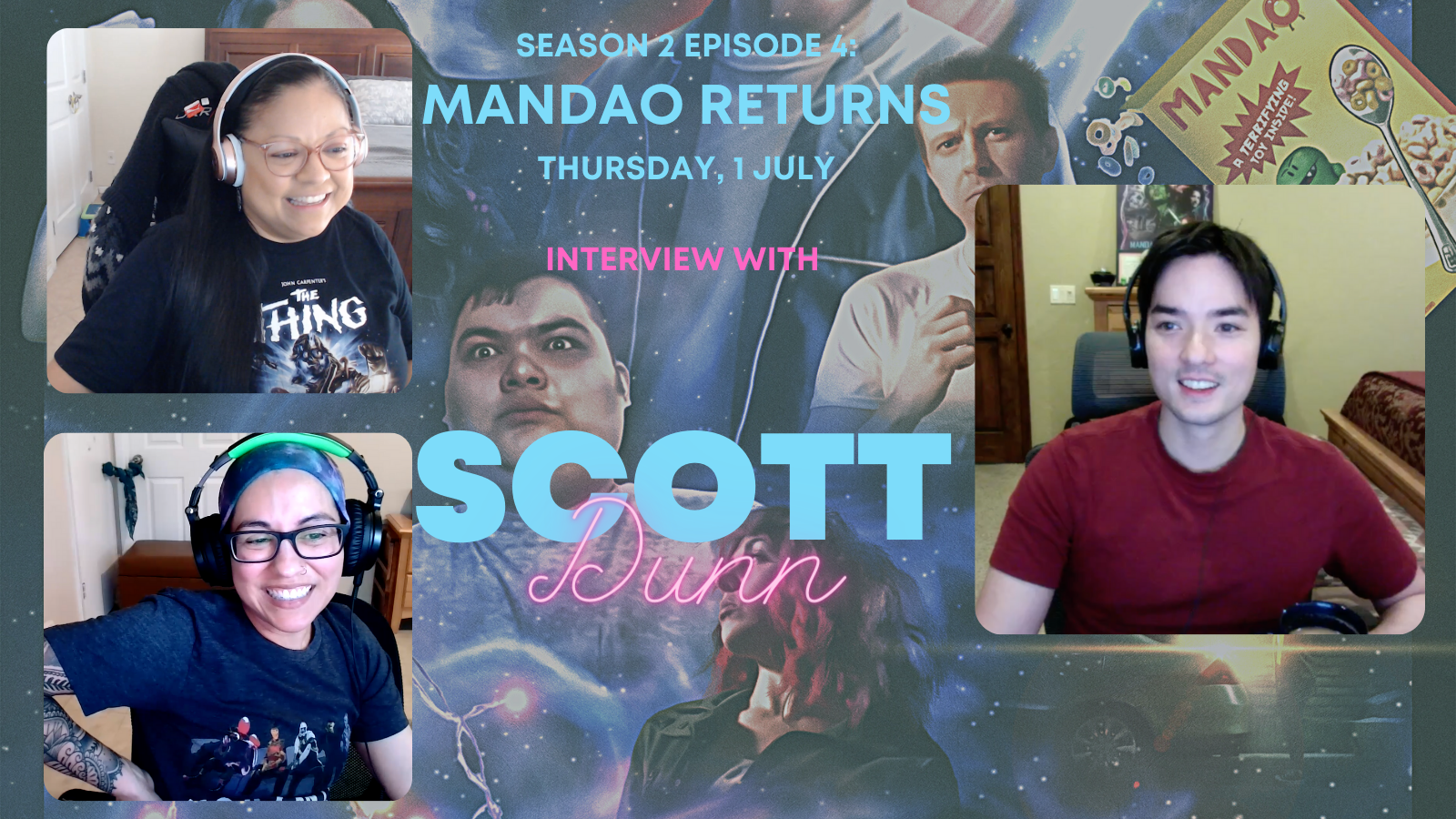 Dalia: Thank you so much, Scott Dunn, for joining us today.

Dalia: So we binged your movies. Mandao of the Dead, Mandao Returns and Schlep, plus your YouTube videos as well.

Dalia: So, listeners, today we have Scott Dunn --, screenwriter, director, actor, Korean American filmmaker from Illinois. From your IMDB, Scott Dunn, “made films with his friends as a hobby throughout his childhood. After graduating high school, he began his career acting in Chicago before moving to LA. In 2016, Scott Dunn made his first feature film, “Schlep”, which won best comedy drama at the Hollywood Boulevard Film Festival.”

I love that it says here that Gina Gomez Dunn wrote that bio. I've read some of your interviews where you say you couldn't do this without her.

Scott Dunn: Oh, she's 50% of this whole thing. Maybe more. I can't say it enough because she's organized and she has good ideas and helps these projects actually get made. She's definitely key.

Dalia: Going back to you, making movies, when you were younger with your friends, what kind of movies did you make?

Scott Dunn: I liked horror movies back then, but I wasn't allowed to see them. So I was like trying to guess what “Scream” was about, and I made that with my friends. It makes you use your imagination if you haven't seen the movie before, you know? But eventually we got into hour long movies, just for fun. Like we didn't have YouTube back then really. Not when I was starting to do it.

Dalia: Do they still exist somewhere else?

Scott Dunn: They do, but I have to find that hard drive. You know, that would be cool to watch.

Dalia: It's kind of like how our podcast got started when we were younger. We used to record ourselves on a tape recorder. We’d have our own radio shows or we would watch a movie like a million times and have it memorized.

Scott Dunn: I love that you started that way, too, because that reminds me so much of like when I was growing up. And I think a lot of people when they were younger actually did this more than we think.

Alma: How long were you in LA before you decided that you wanted to go back to filming?

Scott Dunn: I got there in like 2011 and by about 2015, I had done “Kickin’ It”, the Disney show. I think about 2015, Gina and I decided it was time to go back to what I love. I wasn't having very much fun auditioning. But that's when I got back to it, and that's when I started having fun again. I want to make the movies I want to make and no one was going to cast me in what I want to do anyway. It was a great thing. I don't look back. I love that we made that decision to make our own stuff.

Alma: Did you find inspiration from other screenwriters and directors?

Scott Dunn: Oh, yeah. Um, well I was watching a lot of Mumblecore movies. And Mark and Jay Duplass were a big one for me. They make all these low budget movies and they take the power into their own hands. They don't wait for other people to give them permission and they don't wait for big budgets. That's key because if we were waiting for the right budget, then I'd still be waiting.

Dalia: I started following y'all on Twitter and there was a conversation about diversity in movies, diversity in horror movies, which is very obvious in your movies. Do you find yourself naturally in that environment of creatives who happen to be a diverse group of people?

Scott Dunn: I think it's just natural. It's not like we have to force it, but we like it. That's who we're hanging out with and we always want to include it, but I think it's better when it comes naturally like this, you know? It is important because sometimes I'm looking and...never underestimate what it's like to see someone who looks like yourself on screen. You know, I just think it's important.

Dalia: We kind of touched upon it a little bit, but as a Korean American, how aware were you when you started acting or filmmaking about that lack of diversity in film? Were you aware of it and did it affect you?

Scott Dunn: I was aware of it just as an actor, ‘cause I was auditioning a lot and I just never felt like I was right for anything. And what they would call me in for was kind of like, they only see you in a certain way. As an Asian person. They have a very small idea of what that can be. And I hope that it changes because they wanted us to be happy after “Crazy Rich Asians” came out. And I'm just like, let's do more. Let's do more. But yeah, I'm definitely aware of it.

Dalia: Your wife is Latina. Do you find that the projects that you are both working on, that it’s helping to speak more to that diversity? I know you said that you didn't start intentionally doing it with that diversity in mind.

Scott Dunn: Yeah, yeah. More and more. I think it is important. Maybe we didn't know how important it was at the beginning, but as the years have gone on...yeah, absolutely. I don't think any movie we make will be absent of that kind of diversity. And, you know, Hollywood's not the only game in town.

Like YouTube...my wife and I talk about new Hollywood all the time. And we're like, what is that anyway? And I kind of realized that on YouTube, there's a whole bunch of people cropping up that are doing what they want to do. You'll be very disappointed if you rely on Hollywood to give you what you think is needed. You got to go and get it yourself. So, I'm thankful for YouTube.

Dalia: Okay. So I do want to discuss, in all three movies (Schlep, Mandao of the Dead, Mandao Returns), you touched upon mental health a little bit -- depression, uncertainty of your future. Was that intentional or did that just kind of evolve as you're writing the stories?

Scott Dunn: Well, usually I start with a hook that I like. Something non-emotional that I just kind of get excited about. But then later on you have to fill in some things like from your own life, to give characters something to grow from. Like guilt and depression. That's just part of me sometimes -- the guilt, the depression, the fears. I mean, I think everyone feels this, right?

That's going to just be part of it. Depression is part of it, especially during 2020. It's part of you. Like the characters you play and the other characters are part of you, too. It's cathartic after the movie's done, it feels like you can close the chapter on that thing, you know. Whatever it was at that time.

Dalia: So we've already taken up a lot of your time. Do you have any advice for people who don't have the connections, they don't have the money, and they want to go into filmmaking?

Scott Dunn: Watch a bunch of indie movies. Watch the Duplass brothers movies because they have the indie film mindset that you'll probably need. Go to my YouTube channel and watch the making of “Schlep”. It details how many mistakes I made, but hopefully my mistakes can help you. Pick up your phone and make something, because the first few movies might be crappy anyway, so just make it. Make it and they'll get better over time.

To watch our interview with Scott Dunn in its entirety, visit our YouTube channel:
https://youtu.be/rYRx1-GFmdo

You can also listen to the full audio version of this podcast episode on our website.
https://www.nightmaremoviepodcast.com/mandao-returns/